When you think of Violet Jessop, “lucky” is a term that comes to mind.

She was born in Argentina in 1887 to Irish immigrants. She became ill with what her doctors said was fatal tuberculosis. Somehow, she survived.

After her father passed away, her mother decided to move the family to England, where she started to work as a stewardess at sea.

Shortly after, her mother became ill and couldn’t work, so Violet took her place on the boat.

Violet quickly found herself facing a unique problem: she was too young and too attractive.

In those days, it was thought that it was better to “avoid problems” by hiring older, married women.

To deal with the problem, Violet started showing up to interviews with old, wrinkled clothes and no makeup. She was accepted to White Star Line, one of the biggest shipping companies at that time.

Violet Jessop: Working on the Olympic

In 1910, she began to work on deck of the Olympic – the biggest and most luxurious boat in the world at that time.

Despite the low pay (her wage was 200 pounds a month in today’s terms), she felt in love with the yachting world.

The Olympic collided with a British warship.

Fortunately, despite the extensive damage to the boat, it was able to return to shore with no fatalities. Many people were injured, but Jessop suffered no injuries from the accident.

Some people might have developed PTSD and searched for another job, but not Violet.

Violet Jessop: Working on the Titanic

She returned to her job shortly after, and at the age of 24 was promoted to a coveted job: a stewardess for the VIP  on the new luxury boat, the Titanic. 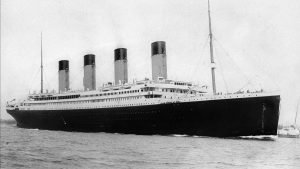 After the Titanic struck an iceberg, Violet was instructed to stand on deck to make sure that even the passengers who didn’t speak English would know what to do.

Her life was saved because she was trying to save other people’s lives: when passengers refused to get in the lifeboats out of fear, Violet and other stewardesses were asked to serve as an example and enter life boat number 16.

She did, and so her life was saved.

Strangely, in interviews, she stated that the thing she missed most after the sinking of the Titanic was her toothbrush that she forgot on deck.

Did Violet then decide to stop working on luxury boats?

Violet Jessop: Working on the Britannic

And so Violet found herself on board the Britannic. 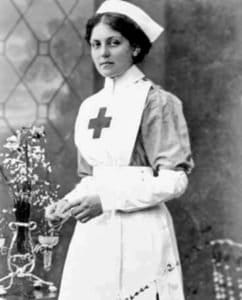 She was assured that when the Britannic was designed, it took into account mistakes from the Titanic and corrected them.

The boat was converted into a hospital ship in 1915  as part of England’s war efforts.

The boat sunk on November 21st 1916 when it was bombed by the German navy.

The entire boat sunk in 55 minutes.

The sinking of the Britannic was considered a success by the German army – it was the largest boat lost during the war, and 30 people were killed.

Today, the Britannic remains the largest passenger ship on the ocean floor.

Jessop jumped into the water as life boats were ripped in the boat engines.

Unfortunately, the third time wasn’t the charm for Jessop: this time, she didn’t come out of the sinking unharmed. She suffered a serious blow to her head and cracked her skull.

Astoundingly, though, she had no clue.

She complained of headaches for several years, and a doctor diagnosed her cracked skull.

If you thought that was the end of her boating career, you’d be wrong.

After the end of World War II, Violent started working for the competing company, Red Star Line, and then the Royal Mail Line.

Fortunately, none of the boats she worked on in these years sunk.

She retired from sea life at the age of 61, and spent her last years gardening and raising chickens.

She wrote a memoir about her life (and accidents) in the shipping world: Titanic Survivor: The Memoirs Of Violet Jessop, Stewardess.

In 1971, she passed away of congestive heart failure at the age of 81.

What an amazing life she had, the woman who was known throughout the the United Kingdom as The Unsinkable.

More Articles You May Find Interesting: