Sor Juana Ines de la Cruz: Who Was She?

She was a polymath whose mastery of multiple fields such as literature, philosophy, science, and music made her a remarkable figure in history.

At the ripe age of 17, she proved to be an intellectual powerhouse when she debated Mexico’s leading experts and won.

She is widely considered one of Mexico’s most influential writers ever.

Imagine that you’re sitting across 40 of the smartest and most educated people in the country – and next to them is the hand to the king and the Archbishop.

In the audience sit the senior members of the court, the Noble family, the clergy, and really, anyone who matters.

And they’re all there for one reason: to test your knowledge.

Of course, this “test” was not meant to be neutral, but to prove that women couldn’t be educated.

But to everyone’s amazement, you prove the opposite.

That was Sor Juana Inés de la Cruz, one of the smartest and most wonderful women to have ever lived.

Cruz was born in a small village in “New Spain” (modern-day Mexico, which was then under Spain’s direct colonial rule) on 12 November 1648.

Nothing about her birth could forecast that she would grow up to be one of the greatest Hispanic authors of all tome.

She was the illegitimate daughter born to a Spanish father and a Criolla mother.

She was sent to live with relatives, where she developed a lifelong passion for learning.

She taught herself Latin and local Native languages at a time when women’s education was considered contrary to the Catholic faith and women were expected to be traditional wives.

She eagerly read everything in her grandfather’s huge library: Astronomy, Philosophy, literature, and everything else.

When she was 12, her aunt decided that it was time to send her to Mexico City.

Her hope was that Juana would find work in the court of the viceroy (the new governor of Spain) and that there she would find herself a groom.

But Juana had ideas of her own.

She caught the eye of the governor’s wife, and quickly became one of her favorite servants.

She became well-known in the palace for being one of the most educated and talented people of the time, and the poems that she wrote became popular.

Of course, not everyone approved. Many people frowned upon this bastard’s girl pushing the boundaries on women’s education and writing.

So in 1664the governor made her a tempting offer: 40 of his most educated men would test her knowledge, and if it would be discovered that she was as smart as people said – she would be hired as his daughter’s tutor, and if not, the public would realize that women and education don’t go together.

This was a huge risk for Sor Juana Ines de la Cruz: she wasn’t risking only public humiliation for herself, but also to the idea that women should and could be educated.

So everyone gathered and witnessed a miracle: a girl of no more than 17 stood in front of the court’s most educated and fluently and wittily answered all questions.

She got all the questions right.

The governor had no chose but award her the coveted role of the king’s daughter’s teacher. 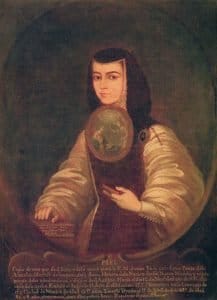 Her greatest passion was learning.

She dedicated her free time to books and the written word, and her love poems quickly became known through the kingdom.

Because the world didn’t know how to handle smart single women, pressures on her to marry and the public scrutiny she faced were amounted.

To ease some of the pressure of, she decided to ordain as a nun.

She continued to study and write in the monastery – and ultimately it almost cost her her life.

In 1690, a local priest published her works in response to one of biggest theological commentators, anonymously and without her knowledge.

It was an insult that the Church and the Inquisition could not take: a woman involved in theological matters?

It was against the law.

The priest published a rebuttal to show that Juana was wrong and to make it clear why women weren’t allowed to engage in theological matters.

Juana was under a lot of pressure to release a public announcement “admitting her mistake”, but she surprised everyone by doing the opposite: she wrote a long pamphlet that passionately argued that women should be allowed to engage in theology.

It was the first feminist pamphlet in America, many years prior to the suffragists and other women’s rights activists.

The Spanish Inquisition wasn’t fond of the pamphlet – to put it mildly.

A priest who publicly defended her was arrested, and the only thing in her favor was the public’s appreciation for her poems.

She was excommunicated and was declared a heretic.

One women defended her more than anyone else: the then-Governor’s wife (who replaced the Governor who tested her), and who was her lover for a time.

She was just 47 when she died.

In 2022, the American Episcopal Church venerated her, and declared that April 18 would be commemorated as her feast day.

Her works and poems are still very influential in Mexico. She is considered by many to be one of Mexico’s Golden Age most importnant writers.

She has also become a feminist hero, for her argument for pro-women education and theology involvement.

Today, she is considered to be one of Mexico’s heroes, and until recently her face decorated the 200 pesos bill.