When she was a teenager, Lyudmila Pavlichenko heard her neighbor’s son say that women can’t shoot – and she got angry.

She decided that she would prove him wrong – and become the world’s best sniper along the way. And so she did.

Pavlichenko, who was born in the Ukraine in 1916, signed up for a local shooting class and got a sniper certification within several months.

When the Germans invaded the Soviet Union in 1941, she quickly volunteered for the Red Army.

Like many other women who volunteered for the Red Army, Pavlichenko was originally appointed as a nurse.

But she wasn’t happy with her placement.

She didn’t want to be a nurse – she wanted to fight in the frontline. After she insisted, the Red Army agreed to send her to a sniper course.

Eventually, Pavlichenko became one of the 2,000 women who fought in the Red Army during the Second World War.

Even after completing the sniper course, a shortage of equipment prevented her from receiving a personal rifle. Eventually, a company member got injured an she received his rifle. 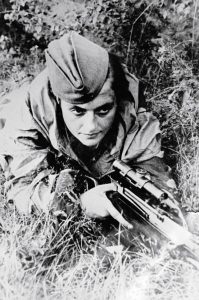 There, on the frontlines, with her rifle – she found her destiny.

Not only did she prove that women can shoot – she quickly became one of the most successful snipers in the Red Army.

The climax came during the siege of Sevastopol, which was known for the cruelty that took place in it, from both sides.

Until then, the Nazis mistakenly thought that she would be the weakest link, because she was a woman.

The German soldiers used psychological warfare on her, calling her name and calling upon on her to surrender.

They even tried to bribe her with offers of chocolate and a senior position in the German army if she would only defect.

When the bribes didn’t work, they threatened her, telling her that when she would be captured her body would be cut into 309 pieces – one for every Nazi solider that she had killed.

Nothing stopped Pavlichenko – she kept fighting even when everyone around her dropped like flies, and even when she became injured.

Eventually, when she was hit in the face with shrapnel, the Red Army decided that she’d had enough, and transferred her to a new position: sniper instructor.

Lyudmila Pavlichenko: Trip To the USA

Not long after, the Red Army realized the tremendous propaganda potential inherent in Pavlichenko and sent her on a new kind of mission: an information campaign across the United States.

The Russians goal was to gather support among the Americans, so that the American government would agree to divert forces from Asia and Western Europe to the Russian front.

And so Pavlichenko found herself in the United States for the first time in 1942.

She quickly became a media sensation. In one of her stops on Chicago, she provoked the audience of men by asking:

Pavlichenko didn’t hold her tongue during her visit, and admonished the American press regarding the sexist questions and coverage that she received.

The press, unsurprisingly, preferred to focus on her appearance and her makeup-less face, rather than her being one of the deadliest snipers of the Red Army.

In one interview, a reporter asked if Soviet soldiers were allowed to wear makeup. Without skipping a beat, she replied:

There is no rule against it. But who has time to think of her shiny nose when a battle is going on?

One of the highlights of her Pavlichenko’s trip was when she was invited to meet Eleanor Roosevelt, the First Lady, herself a woman’s rights activist. She was the first Soviet Union citizen to visit the White House.

Pavlichenko didn’t become addicted to a life of killing, and when the war ended she returned to civilian life. 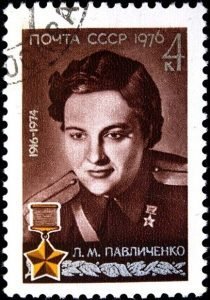 She went back to Kiev University to finish the History degree which she started before the war.

She spent the rest of her life as a historian for the Red Army.

During her lifetime, she won several medals and awards from the Soviet government, and even had stamps printed in her honor.

Woody Guthrie, one of the leading American folk singers of the time and the most prominent anti-fascist voices in the country, recorded a song in her honor: