Miriam Makeba was first sent to prison when she was just 18 years old. It was 1932, during the Great Depression. Her mother, who typically worked as a domestic worker, set up an illegal brewery at their home in order to make some money. Little Miriam spent the first six months of her life in prison with her mother.

Miriam was sent to live with her devout grandmother after her father died when she was five, and her mother worked as a for white people as a maid. Miriam found her voice in church with her grandmother. She began to sing in the church choir and started to become well-known.

When she was 17, she married her first husband, who turned out to be abusive. Shortly after the birth of their only child, Makeba was diagnosed with breast cancer, which led to her leaving her husband. She only fully healed a decade later, following a hysterectomy.

Her luck began to change. She joined The Manhattan Brothers (she was the only woman, of course),  a band that was touring South Africa playing traditional South African songs in addition to music that was influenced from the US. The band became very popular, and for the first time in her life, Makeba was able to travel, as the band was invited to perform in Congo, Rhodesia, and other countries in Africa.

In 1957, she was cast in the leading role of the musical King Kong and toured Africa for a year and a half. She also starred in the movie Come Back Africa, which portrayed the lives of Black people through Africa.

The worldwide success of the movie made her internationally known and she was invited to a very successful tour of the US (she also performed in Israel six times in the ’60s). The world became exposed to African music for the first time, and some of her songs, like The Click Songs, became international hits (“Click” is a common sound in the Zulu language).

In 1960, the Sharpeville massacre became one of the turning points in South African apartheid. A protest against pass laws (in which Black people would need to be approved before travelling from Black communities) saw 69 protesters murdered. Three of the dead where from Makeba’s family.

Makeba was on tour in the United States when the massacre occurred. She was unable to return to South Africa to attend her relatives funeral, due to the apartheid established seizing her passport as a response her her public criticism of apartheid abroad. So she did what she did best: she sang.

Since then, Makeba dedicated herself to political music and to speaking out against apartheid. This hurt her worldwide popularity. At the same time, she strengthened her involvement with the Black Panthers in the ’60s, and even married one of their most prominent leaders. This hurt her popularity with the white public even more.

Makeba didn’t let that stop her from singing and performing. She kept touring Africa throughout the ’60s and ’70s, and was invited to sing in almost every Independence ceremony of the new countries (including Kenya, Zambia, Angola, and Mozambique). She published her memoir, Makeba: My Story, in 1989.

She returned to her homeland in 1994, when Nelson Mandela rose to power. She became a UN Goodwill ambassador in 1999, and in 2002 she gained institutional recognition for the first time when her album was nominated for a Grammy under the World Music category.

During a 2008 concert held in the memory of 6 Ghanaian immigrants who were murdered by the city mafia, she suffered a heart attack onstage and died several hours later in the hospital.

Pata Pata – One of her greatest hits 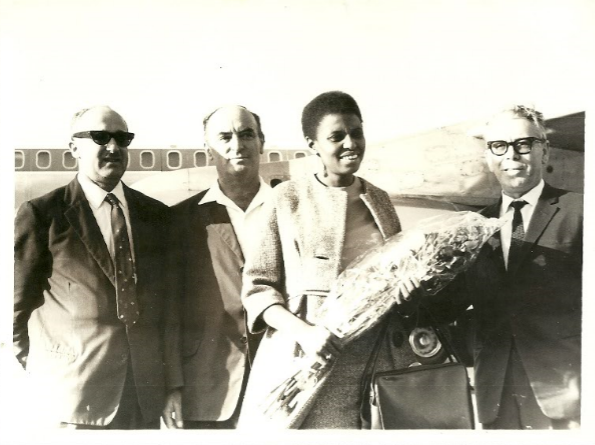 Miriam Makeba being welcomed in Israel in 1964

Nawal El Saadawi: At Jail, this Egyptian Feminist Wrote A Book With An Eyeliner

Sojourner Truth: The Slave That Sued Her Master & Won