She dropped out of school at the age of 16 and never formally attended university. Yet she was still a groundbreaking virologist.
In fact, she was the first person who succeeded in photographing the virus that causes rubella and was the first person to identify a new class of virus: the coronavirus.

Almeida was born on October 5, 1930 in Glasgow to a lower middle-class family.

Her dad was a bus driver and her mom was a store clerk.

At 16, she dropped out of school but still managed to get a job as a lab technician in a hospital in Glasgow.

Through her day-to-day work, she learned the techniques of virus culture photography.

She started working at St. Thomas hospital in London in 1964 – the same hospital that Boris Johnson was hospitalized when he was sick with Covid-19.

She also earned a Doctoral degree based on her everyday work.

During those years, the scientific community was dealing with a big challenge. How do you take a photo of a virus, something so small that it couldn’t be seen, even with the best microscopes of the time?

Almeida’s breakthrough was her understand that she can inject antibodies that would cluster around the virus and enable her to “see” it, isolate it, and take a photo of it.

This breakthrough enabled her to reach her first significant achievement: taking a photo of the Rubella virus. The virus had already been researched, but scientists hadn’t been able to isolate and see it yet – until Almeida came along. 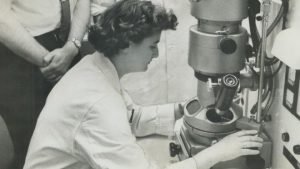 In 1964, a colleague at the hospital asked for her help.

He couldn’t isolate a virus that caused symptoms similar to the flu and suspected it was a new kind of virus.

Almeida came onboard and succeeded in creating a photo of the virus, which became known as B814. The photo proved that it was indeed a new kind of virus.

The virus’s unique structure reminded Almeida of the crowns surrounding the sun, so they decided to call the virus family Coronavirus.

Shortly before she died in 2007, she returned to the lab and joined a group of scientists in St. Thomas, the hospital where she had worked.

The team focused on capturing photos of HIV, and succeeded in capturing the first photo of the virus in the best quality seen thus far.

In 1985, she put her microscope in storage and retired.

After her retirement, she became a yoga teacher, sold antiques, and specialized in renovating Chinese porcelain.

Almeida’s accomplishments are not well known or talked about enough. It is fitting that in these times, we acknowledge the first woman who took pictures of and helped categorize the first known coronavirus.

An incredible accomplishment in itself, which becomes even more amazing when you consider that she never even finished high school.

More Articles that may interest you: