An economy that’s based on spice trade, martyred Jews, and the rule of the Portuguese empire?

Welcome to the 16th century.

In the ongoing chaos of the expulsion of the Jews from Spain, the Inquisition and the Renaissance, there was one brave Jew who chose to contribute to the Jewish community openly, as it was living in secrecy and terror.

Gracia Mendes Nasi Beatrice de Luna (but you can call her Dona Gracia) was born in 1510 to a family of martyred Jews that was exiled to Lisbon, Portugal, following the deportation of the Jews of Spain.

Dona Gracia’s parents were forced to convert to Christianity.

When Dona was 12, her parents told her that she was Jewish, but that she couldn’t celebrate her Bat Mitzah with hundreds of guests, and not because of COVID-19.

When she was 18, her family decided it was time for her to get married. Dona married her uncle in a secret Jewish ceremony.

Her uncle, Francisco (or Tzemach Benveniste, as he was known to the Jews) was a seasoned trader of black pepper. Her uncle/husband was considered a very influential man throughout the Portuguese empire, due to his success in trade.

After the secret ceremony, they held a large public ceremony with the whole family in church. Francisco passed away just eight years after the wedding, in 1536.

Dona Gracia inherited all his belongings, as well as his business and the headaches that went along with it. The Jews couldn’t catch a break during that dark time, and another tragedy came upon them: the Portuguese Inquisition.

As the decrees increased for the Jews, so did the pressure to leave Portugal. Dona Gracia packed her business and her family and moved to Antwerp.

Her brother-in-law, Diogo/Meir Benveniste (brother of Francisco Mendes) took over the family business, including banking and trade.

Dona Gracia’s sister, Brianda, married uncle Diogo in 1539, but their happiness didn’t last long. Diogo passed away in 1542, but not before he wrote Dona Garcia into his will as the manager of the Mendes/Benveniste business, along with eager nephew Don Joseph Nasi.

The persecution of Jews continued, and the family moved to Venice in 1544.

The Nasi sisters were immersed in economic conflict and succession battles, but the Jews of the time were faced with more complex dilemmas.

Should they be secret Jews (crypto-Judaism), or risk trying to change the decrees? Dona Gracia could live in Catholic Italy, pretending to be Christian, or she could choose to live openly as a Jewish woman, and risk being imprisoned.

She didn’t wait for anyone to help her.

Instead, she did something especially brave.

In 1549, she turned to the Ferrara authorities in Italy to request shelter for her and her family.

Over the years, the family returned to practicing Judaism openly, and started to use the Nasi name again.

Dona Gracia was considered to be one of the richest women of 16th century Europe. It was said she never went anywhere without 40 horsemen and a glorious chariot.

What did she do with that immense wealth?

She could have sat in her villa, but Dona Gracia was both generous and brave.

She used her power and influence to protect martyred Jews and to locate captives throughout Europe. Going against the authorities to take care of Jews during the Inquisition was considered brave by all accounts.

Dona Gracia put an end to her wandering in 1552 when she settled in Constantinople (today’s Istanbul). There, she began her life as a Jewish patroness who didn’t need to hide from anyone.

The woman with the vision couldn’t be stopped, and her social projects went underway.

Initially, she supported the initiatives of local rabbis, the translation of the Bible into Ladino (Jewish-Spanish) and Spanish (known as the Ferrara Bible).

In the days where any revelation of Judaism was met with concealment and fear, translating the Bible into Spanish was considered a completely insane thing to do.

But Dona Gracia didn’t stop there. In 1555, Pope Paul IV came out with a new decree- martyred Jews were to be burned at the stake in Ancona, Italy.

Dona Gracia publicly opposed the Pope and called for Jewish solidarity against the Inquisition in Ancona. She also tried to organize a boycott against the Italians, but that was too much to ask for.

Meanwhile, she continued to be active in the Ottoman Empire (today’s Turkey).

Dona Gracia dreamed of a state of Israel, years before Hetrzl’s conception.

But she didn’t just dream.

She acted- bravely – against authorities.

In 1561 she turned to the Turkish Sultan, Suleiman I, requesting to pay to rent cities in Israel.

Dona Gracia had big dreams: she wanted Jerusalem. The Sultan didn’t approve her request. She eventually leased Tiberius for a fortune, and began to build the city and settle European Jews.

Dona Gracia never stopped dreaming of Israel, but she passed away in 1569, before she had a chance to move there. 500 years later, and her memory is almost forgotten.

Today, you can find several streets named after her in Israel.

You can also visit the museum dedicated Dona Gracia in Tiberias. 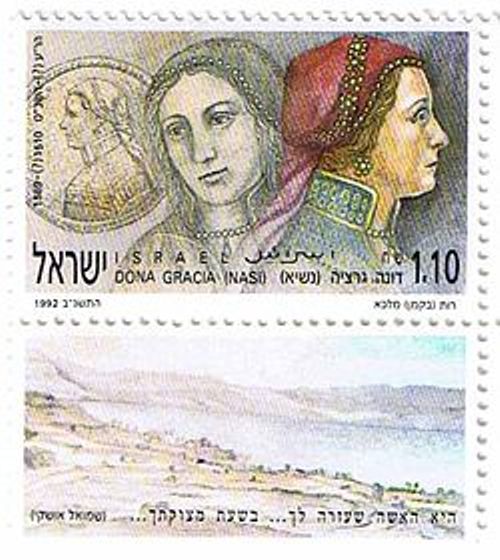